Getting started with CSML

1. How it works 2. Building a chatbot with CSML 3. Creating conversations 4. Managing interactions 5. Memories and local variables 6. Apps and functions 7. Deploy your chatbot

Written itself in Rust and fully Turing-complete, the CSML acts as a linguistic/syntactic abstraction layer, designed for humans who want to let other humans interact with any machine, in any setting. The syntax is designed to be learned in a matter of minutes, but also scales to any complexity of chatbot.

The CSML handles short and long-term memory slots, metadata injection, and can be plugged in with any external system by means of standard integrations or custom APIs, as well as integrated into other programming languages with parallelized runtimes.

To learn more about CSML, you can read this article and have a look on the documentation.

Build your chatbot with CSML

You can easily experiment the language on the CSML development studio, using a sample bot available in your library or by creating your own.

Each bot gives you a full access to the CSML framework - a set of specialized tools to make and customize your chatbots : editor, chatbox, apps, functions and files library, analytics and connectors.

You can create your conversation modifying an existing flow or creating your own.

A flow is a CSML file which contains several steps to be followed during a conversation with a user. The first instructions have to be placed in the start step, then you can move from a step to the next one using goto stepname, and finish the current conversation using goto end. Each step contains instructions on how to handle the interactions within the step: what to say, what to remember, where to go...

For the bot to say a sentence, you just need to use the keyword say followed by the type of message you want to send.

Like a human, a chatbot is supposed to understand and react to messages sent by the user.

In a conversational logic, CSML allows the chatbot to wait for a user answer using the keyword hold, and interpret the expected user input (called event) to trigger an action.

Here is an example of a simple interaction where the bot is asking if the user likes guitar and waiting for two specific answers in order to trigger actions. 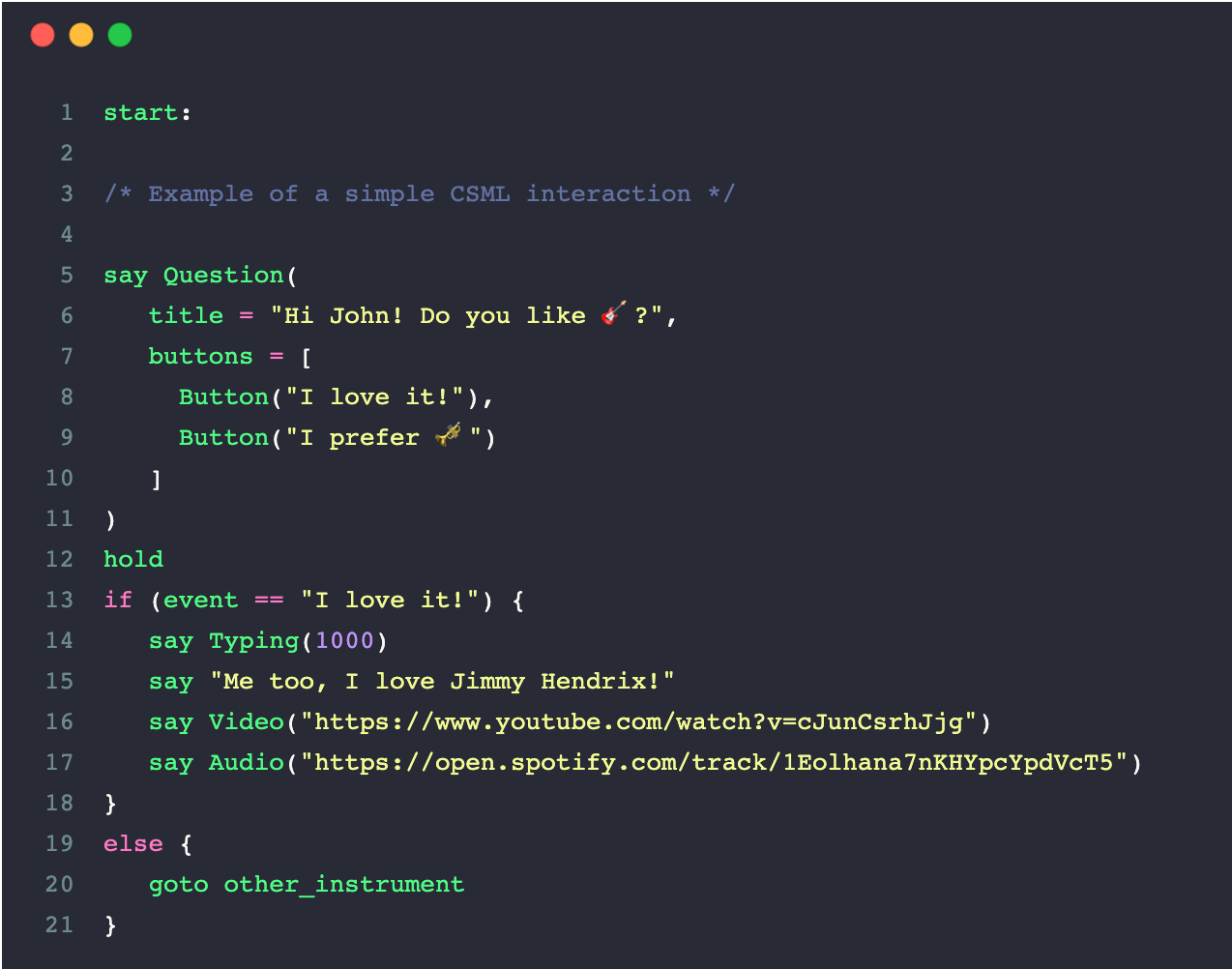 Use memories and local variables

Memory is essential in the CSML logic. When two people are chatting, they constantly memorize information to be reused in future discussions.
CSML provides two types of variables: local variables, with a very short life cycle, and persistent variables, called memories.

The memories are assigned as followed use the keyword remember and can be reused in every steps or in a future conversation, while the local variables are executed within one step, assigned with the use keyword.

You can output any variable into a string value with the double curly braces.

Connect apps and execute your own functions

You can select an existing integration in the apps library or add your own function coded in any language. Find a few examples in our GitHub repository and how to use functions in our documentation.

Once your function is uploaded, you can test it and call it into your CSML step.
Here’s an example of a function available in the apps library, performing any HTTP request easily!

Once your chatbot is ready to chat with your users, you can select the channel you want to connect on. From now you can connect your bots to Slack or using the CSML Client API to receive requests.